The Australian Government's dept. of Industry, Innovation and Science has released details of the 2019 areas in Australian waters for oil and gas exploration. There are over 45 blocks covered by TGS data that are available for bidding, with a closing date for submission of bids being March 2020.

Successful bidders will be offered an offshore petroleum exploration permit. This six-year title can be renewed for a further two periods of five years.

TGS data is available for the following areas in the 2019 acreage release:

Eastern Exmouth Plateau and Lambert Shelf: 13 blocks within the Northern Carnarvon Basin totalling up to 25,200 km2 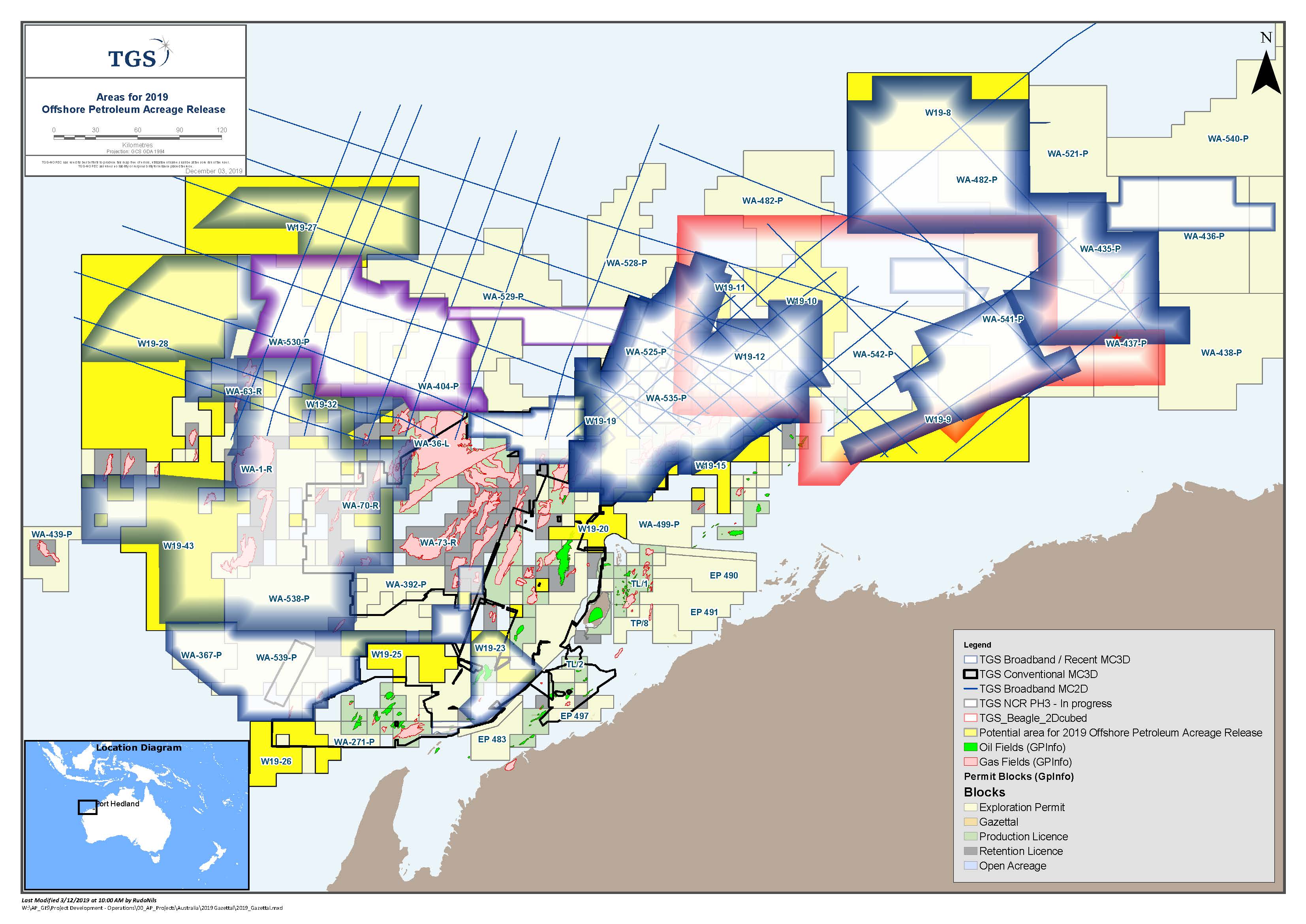 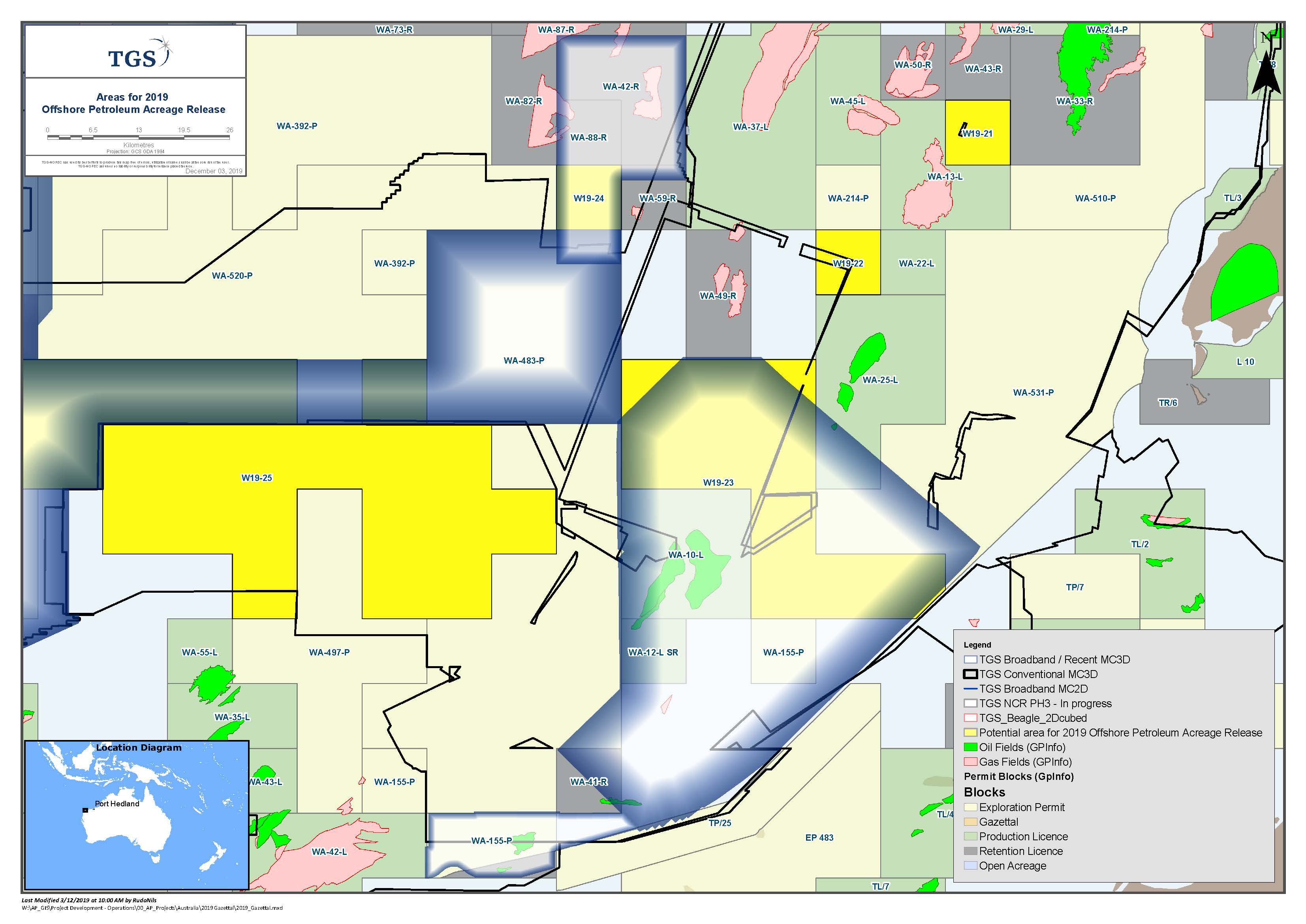 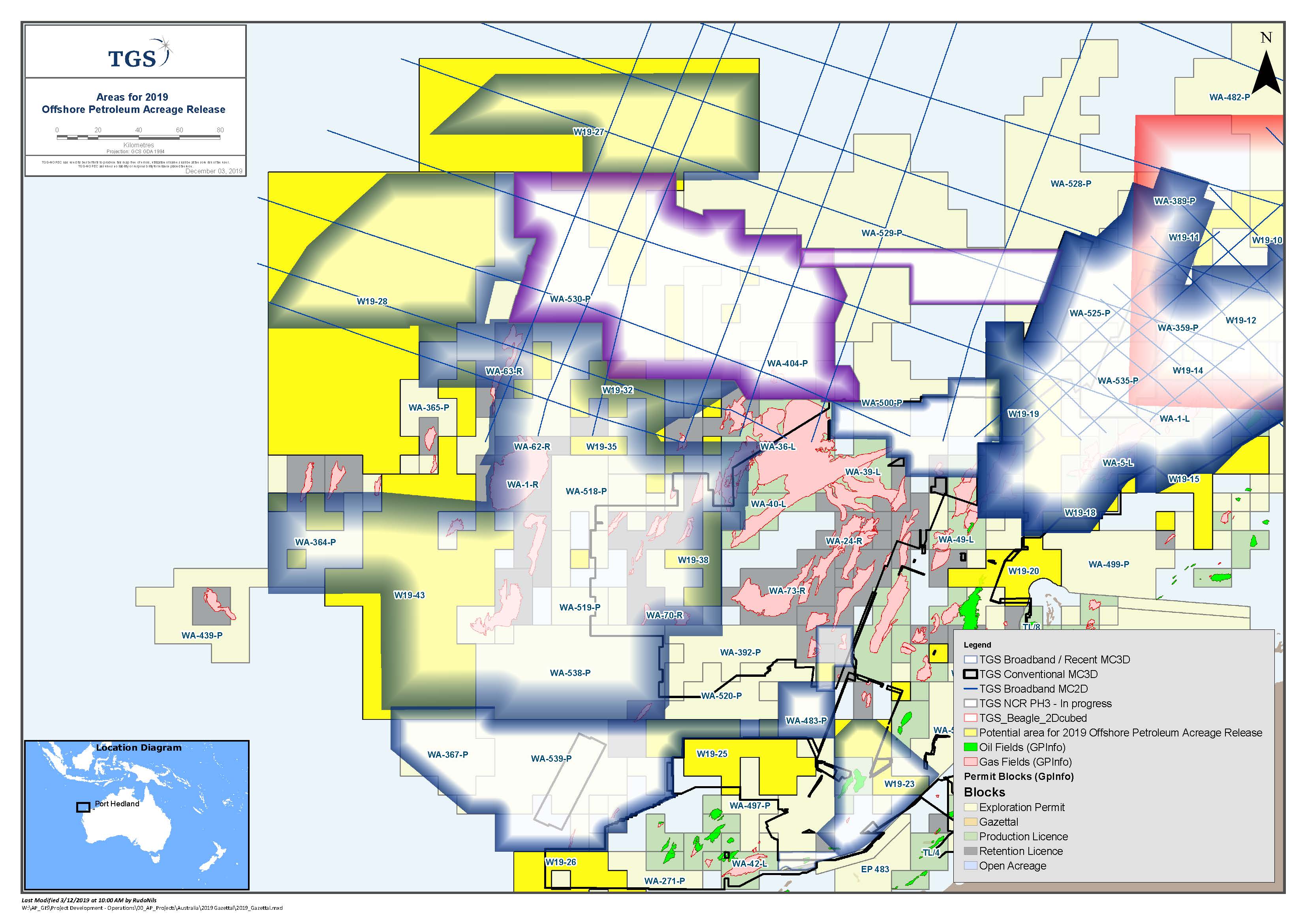 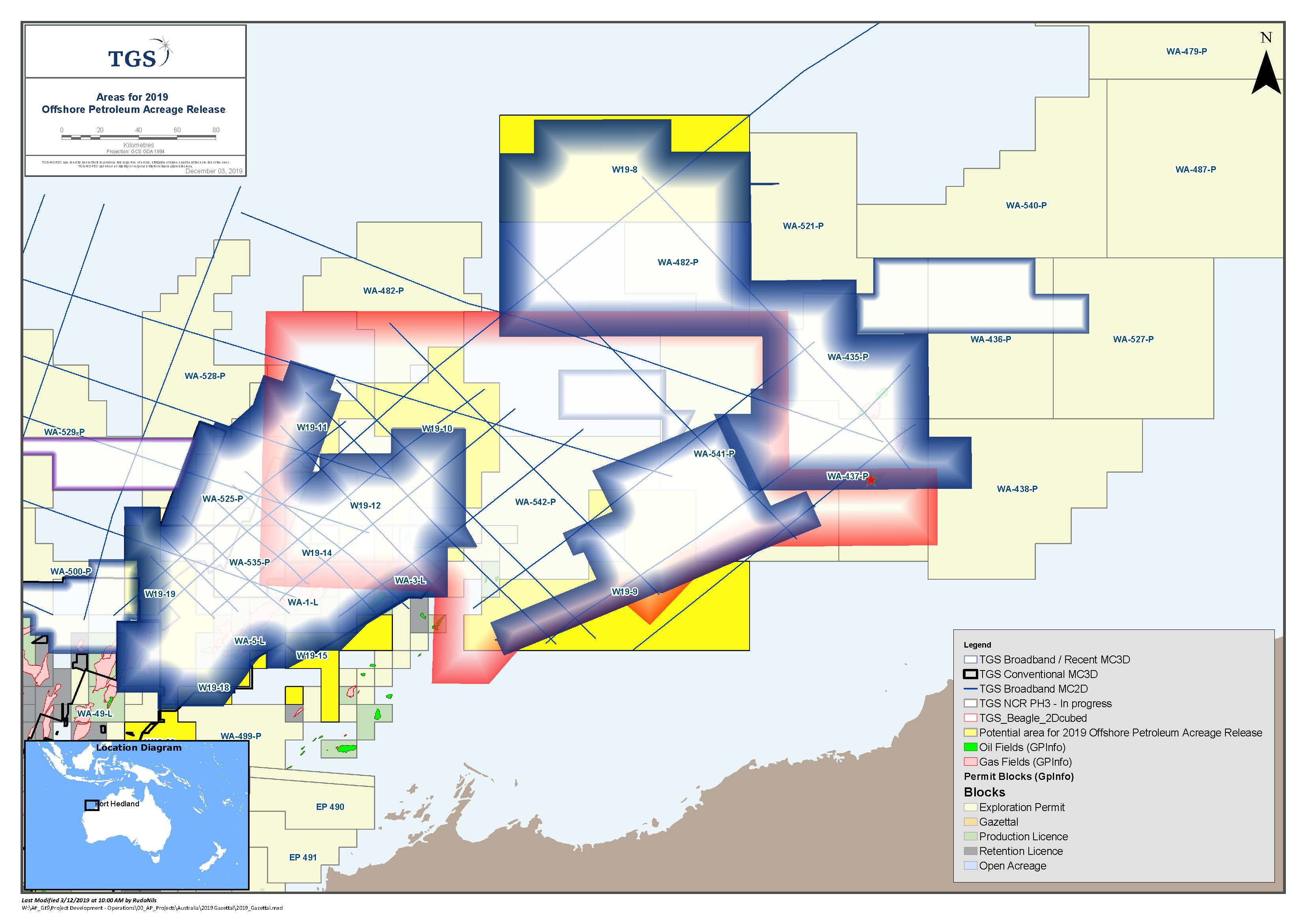 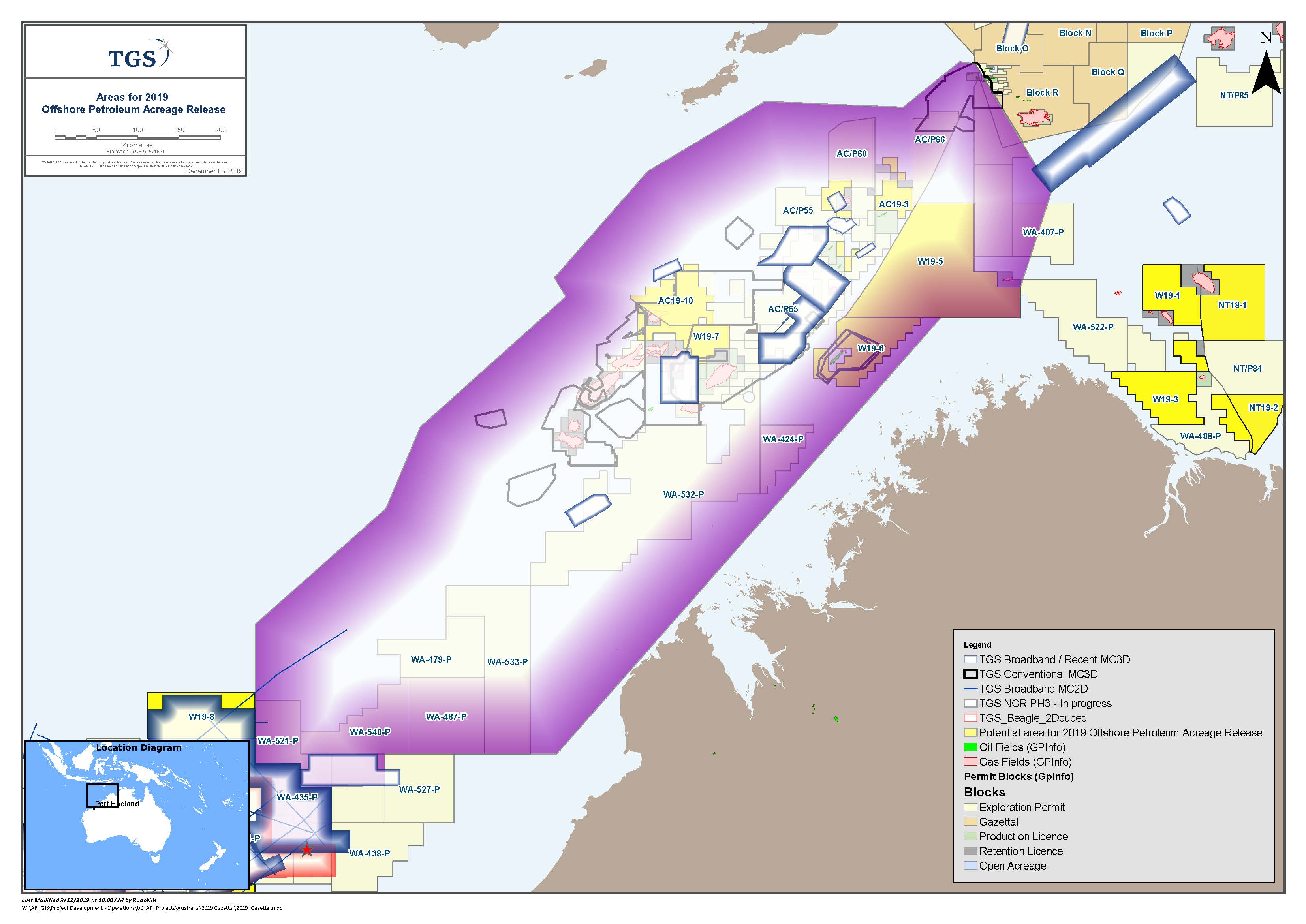 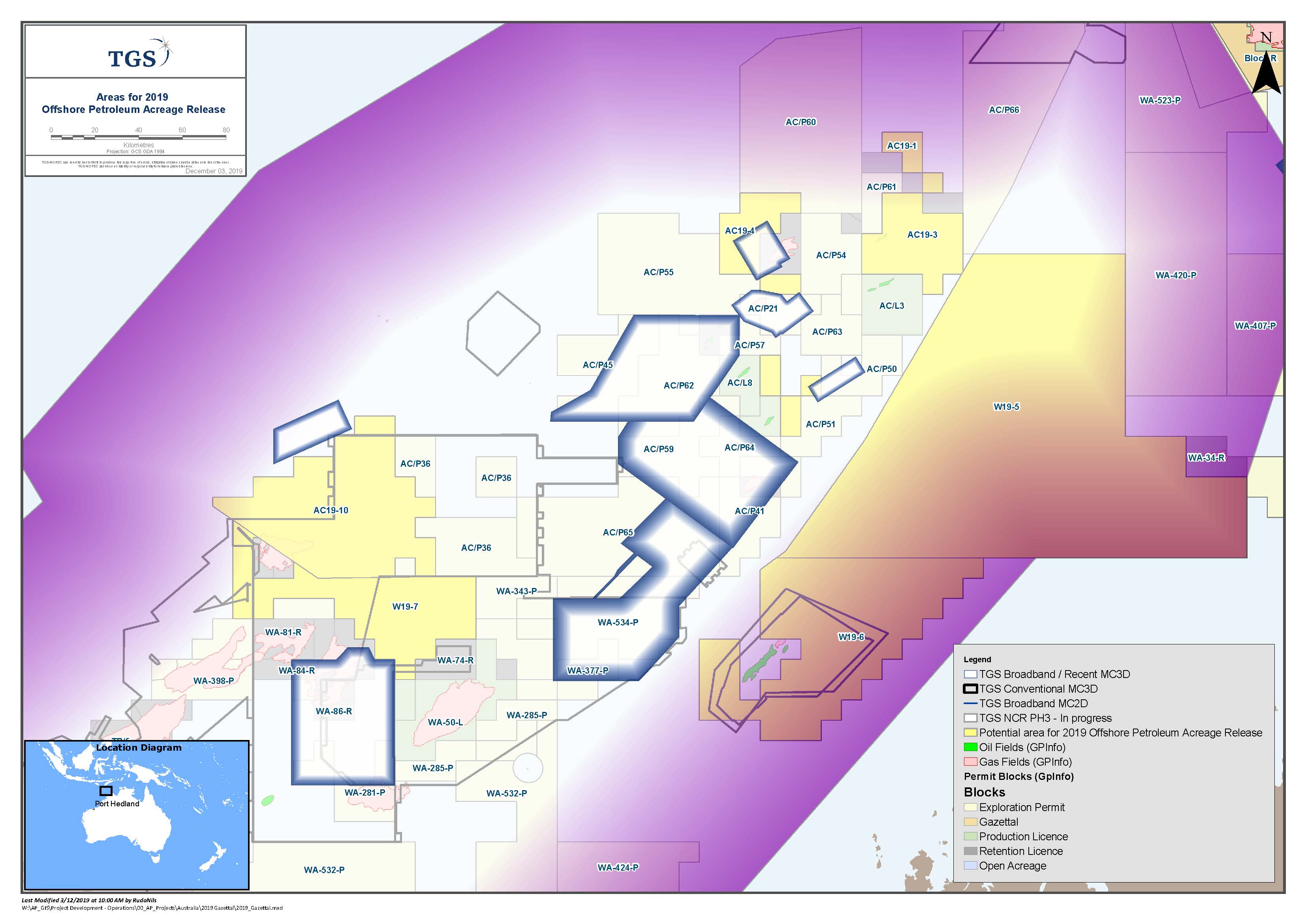 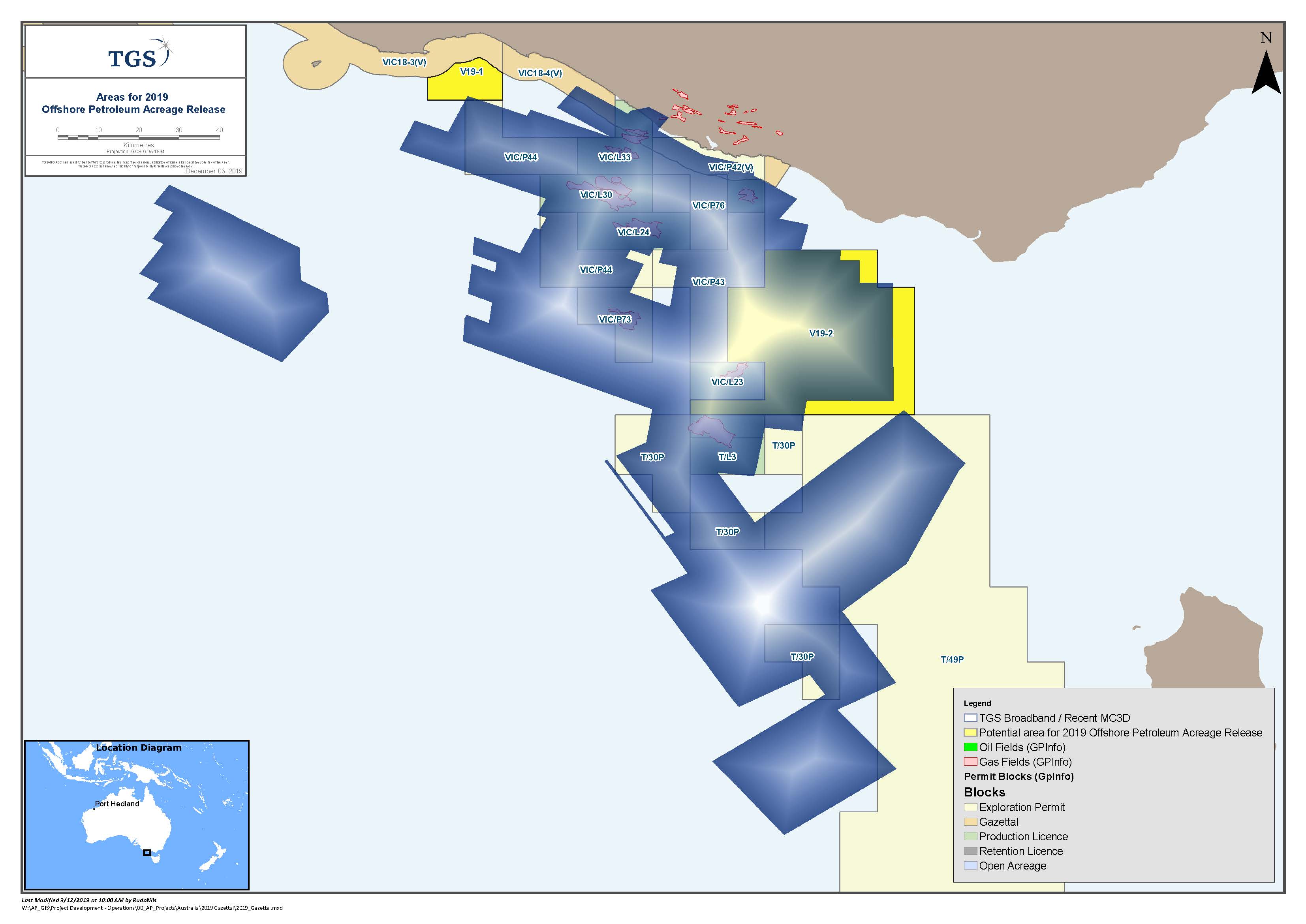 The Eastern Exmouth Plateau is a prospective rifted depocenters, adjacent to proven oil and gas accumulations.

To date, the known play types are Triassic-Jurassic tilted faults blocks and grabens with associated folding, and Upper Jurassic basin floor fans at the edges of elevated horst blocks. The discovery of oil at Nebo, Finucane South and Fletcher within Jurassic reservoirs has proven the presence of a working petroleum system, there are large portions of the sub-basin that remain undrilled.

The Dorado-1 discovery in the Bedout Sub-basin has also highlighted the potential for a new oil play within the deeper Triassic successions sourced from mature Triassic organic-rich rocks, which is potentially analogous to the Triassic geology within the Eastern Exmouth Plateau and Lambert Shelf acreage release area given their similarities. Furthermore, there is evidence of a deeper Permian reef system extending from the Bedout Sub-Basin into the Lambert Shelf which can be seen on modern 3D.

The Exmouth Plateau makes up a large portion of the North Carnarvon Basin, that is characterised by a thick Triassic succession, and overlain by thinner Jurassic and younger sequences.

Gas has been the main phase of hydrocarbons discovered within the large N-S to NE-SW Triassic-Jurassic structural trends and within Cretaceous basin floor fans that were supported by strong direct hydrocarbon indicators. However, exploration drilling results over the last ten years in the Exmouth Plateau have hinted at the presence of an oil-prone Triassic petroleum system in addition to the proven gas play.

The recent discovery of significant oil and liquid-rich gas accumulations in the inboard Bedout Sub-basin, within Triassic reservoirs sourced from mature Triassic organic-rich rocks, has again highlighted the potential of the play in the offshore North West Shelf. Evidence indicating the presence of an oil generating source rock in the Exmouth can be found in the form of oil inclusions (Pinhoe-1), rock facies (Alaric-1) and fluorescence (Eendracht-1, Thebe-2) and gas to C5 readings (Dalia South-1).

The Barrow Sub-Basin is a proven hydrocarbon province, that is close to existing infrastructure, with several producing fields. Multiple proven plays include multi-level structural and stratigraphic plays in Triassic, Jurassic and Lower Cretaceous successions sourced from both oil- and gas-prone source rocks.

The extension of the known Triassic, Jurassic and Lower Cretaceous plays into the released acreage are highly likely due to their proximity to the producing fields. The identification of further subtle hydrocarbon trapping configurations within low relief structural closures and stratigraphic traps may not necessarily display a strong direct hydrocarbon indicators. Modern high-quality seismic datasets are required in order to reveal these subtle signs for the presence of oil and gas bearing reservoirs.

The Browse and Bonaparte Basins are two large rift basins that share the same tectonic evolution history at the larger scale. There are several production fields and oil and gas discoveries across numerous different stratigraphic ages with a wide range of trapping and reservoir methods that prove the prospectivity of the basins.

The Otway Basin is a prolific within the onshore and offshore shallow water areas with commercial gas discoveries and large prospects further offshore. The most recent gas discovery made was in September 2019 at Annie-1. To date the basin remains largely under-explored and has a very close proximity to both market and infrastructure. There are two petroleum systems that are recognised within the basin, being the Middle to Late Cretaceous Austral 2 where existing shelfal discoveries have been made and the Late Cretaceous Austral 3 that is proposed to be at the shelf slope. The known play types include faulted anticlines, large anticlinal features and tilted fault blocks.

Below are details of the TGS surveys listed within the nominated areas.

in-depth information on the latest acreage round

TGS provides the industry with the right data, at the right time, in the right place. Energy Starts With Us! 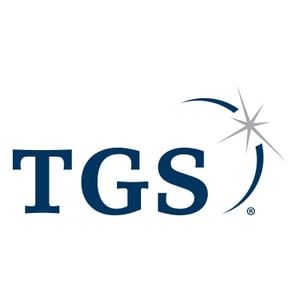