“The opportunities for the international exploration and development majors are enormous, with Somalia having the potential to become one of the most significant hydrocarbon plays in offshore East Africa.”

The First Somali License Round is OPEN...

The first Somali License Round has been described by commentators as a seminal moment in the history of both the country and its hydrocarbon industry.

Offshore Somalia remains one of the last truly frontier oil & gas basins in the
world, with only two exploration wells drilled offshore along the 1,000 km-long margin.

In August 2020 the Somali Petroleum Authority (SPA) oversaw the opening of the country’s first-ever offshore licensing round comprising 7 blocks covering over 30,000 square km. This followed the establishment of the Authority and approval of the Petroleum Law by the Upper and Lower Houses of the Federal Parliament.

The License Round was previously set to close on 30th June 2021, however, following multiple requests from investors and international oil and gas companies, this deadline has been extended (official statement).

To view the Licensing Round Pre-Announcement webinar, please click on the images below (the presentation is in four parts).

Under the country’s first-ever licensing round, the Somali government will offer the seven offshore blocks viewed as having the most potential, in order to reap substantive benefits from the country's hydrocarbon resources. The prospective blocks for this round are numbers 152, 153, 164, 165, 177, 178, and 204. 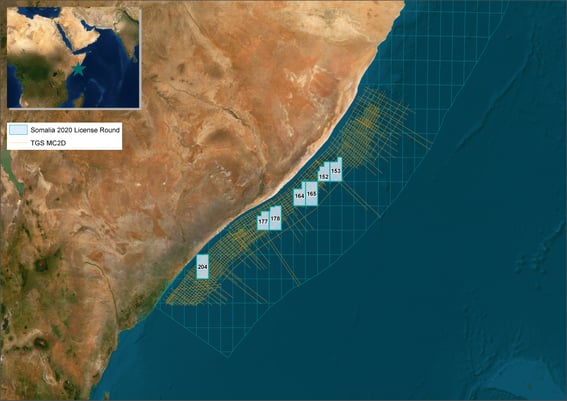 The new 2020 Somali Petroleum Law  has been designed to provide a stable, long-term legal and regulatory framework that promotes cooperation between IOCs and consortiums in a way that protects the investments of the exploration companies participating.

A revised Production Sharing Contract (PSC) model and Tender Protocol documentation have also been designed in parallel with the 2020 round to encourage exploration, with fiscal terms reflecting TECOP (technical, economic, commercial, Operational, and Political) considerations.

The License Round opened on August 4th, 2020 with bid applications to be submitted before the deadline, which is expected sometime in early 2022. This date will be confirmed imminently.

TGS holds the only seismic data available over the blocks of this License Round and has an exclusive agreement with the Somali Government to market this data to interested parties.

The survey design, which covers water depths of 30 m to 4,000 m, has allowed for seismic coverage over the shelf, slope, and basin floor with dip, strike, and recording time intervals suitable for defining a range of leads and prospects. Modern processing algorithms were applied to the raw data to achieve optimal subsurface imaging.

For data availability, click on the following link: Discover the TGS data library

Four source rock intervals in Somalia have been identified: a pre-rift Karoo source of Triassic age; a syn-rift Jurassic source deposited in rifts formed by the break-up of the Gondwana super-continent (both highlighed below); post-rift Late Cretaceous; and Early Tertiary source rocks deposited in discrete global ocean anoxia events.

Basin modelling has identified the potential for all four of these source environments to be (or have been) mature for Oil and Gas generation in places across the Somalian offshore.

For further information please fill in the information request form at the top-right side of this page for any specific information you require, and a representative will contact you.

See all official announcements  and news on the license round:
http://somalialicensinground.com/